Last August, a routine physical left me surprised. I learned that I had gained 20lbs since college, roughly 40% of which came in the last year. I had an exercise routine, I walked a lot, and I thought I ate well. I didn’t think I felt or looked noticeably fatter, but the data doesn’t lie. This was not the “up-and-to-the-right” graph that I like. In retrospect, I think I indulged in the free sweetened drinks and desserts at work a little too much.

It was clearly time for a dietary change. At the time several of my coworkers were espousing the virtues of a keto diet, one that significantly reduces carbohydrate intake and replaces it with fats and protein. The overly simplified premise is that consumption carbohydrates spike secretion of insulin, and insulin is responsible for fat storage. By eliminating the carbohydrates, there is significantly less fat storage. Without carbs, the body goes into a state of ketosis where it uses ketones for fuel. Ketones are from the breakdown from fat stores when there’s not enough glucose. This causes weight loss and a variety of metabolic improvements. I’m missing a lot of detail, of course, but this is the gist of it.

The TL;DR: I lost 15lbs in 2 months by giving up carbohydrates. Then 5lbs more in the months that followed.

After my first couple days, I experienced the “keto flu”, the uncomfortable transition of entering ketosis. I had a headache, felt lethargic, and endured a stomach cramp, but the symptoms only lasted for a day. I didn’t see any weight improvements after a week, but after two, the improvements were noticeable.

I’ve heard people who claim that this diet gave them more energy, and they felt sharper, etc. Mentally, the only change I noticed was that I would wake up quicker and feel less bleary-eyed. Other than that, I generally felt the same.

I didn’t exercise extra. I didn’t go hungry, or count calories. I ate until I was comfortably full. I just gave up carbohydrates. Specifically, I limited myself to 25g of net carbohydrates a day. Net carbs = total carbs - fiber. I didn’t keep a running carb total, but I used the 25g as a basis for how many carbs I could consume in a meal. If I ate 3 meals a day, I could roughly portion those out. For example, if a salad dressing at dinner had carbs, I could measure the amount so I had about 8g worth (1/3ish of 25g) of net-carbohydrates.

Of course, I slipped here and there. At social occasions I had a beer or a slice of pizza. I’m human. Overall, I stayed pretty true to the diet.

Here’s a sampling of some of my meals. 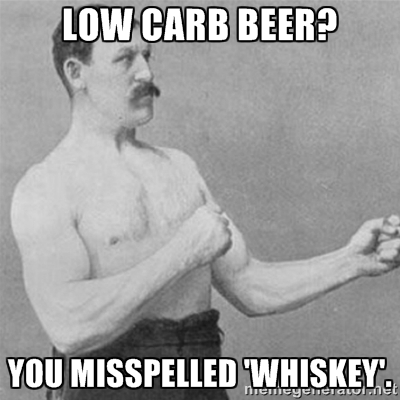 As you see, there’s not much fruit here. Berries are high in fiber so their net-carbs are low. I had an apple or orange once in awhile. Bananas, mangos, melons are entirely sugar and were avoided. Most of the micronutrients are obtained through vegetables. And no, I never got scurvy. It’s also lot more meats and vegetables, which is unfortunately usually a more expensive meal. I also consumed more meat than usual. You can do this diet as a vegetarian or vegan, but it’s harder.

Most restaurants were pretty accommodating to bunless, breadless requests. Occasionally, I would hear, “You don’t want fries or the bun!” but that was few and far between.

So, I lost 20lbs overall, my triglycerides were down, and my LDL cholesterol was down slightly (studies suggest this might not be as important as HDL/trigliceride ratio, but that’s a topic for another time).

Now that my weight is back to healthier levels, I’m gradually reintroducing carbs but making a few crucial adjustments. I really don’t want to live my life without enjoying a cookie or a beer every once in awhile. So, here’s my changes:

After my own education and personal odyssey, it feels like we’re in the early stages of a long overdue dietary course correction. Although discontinued, it’s laughable how wrong the food pyramid appears to be. I don’t think all calories are created equally and I don’t think sugar is a harmless “empty calorie”. We’ve been told to reduce fat, but how many of us have known someone who gave up pop, and lost weight? I think calorie restriction can work in the short term, but being ravenously hungry is not sustainable lifestyle. I also think nutrition is a relatively young science, and we have a lot to learn.

Shout out to my friends Eirik, Mark, and Jeff for the insight and advice!

Obviously, I’m not a doctor. Please don’t undertake this because some guy on the internet said it was great. But, I would urge you to read some of the literature, and see if it’s right for you.