A spoiler free review of a boardgame? Yes, that’s now A Thing™. Most boardgames have the expectation of repeated, endless play at least until you lose all the pieces. These new Legacy games allow for a single run through (which would involve multiple play sessions), where the game is permanently altered over time by trashing pieces, applying stickers, and adding new elements. The decisions made in the game affect future game play. By the end, the game is so radically altered that replay is difficult.

Personally, I thought this was an intriguing idea. It allows for a compelling storyline to weave it’s way through the game. The single run through seems to turn a lot of people off. It doesn’t bother me; how many TV shows or movies, have you purchased that you only watched once? Seems similar to me. 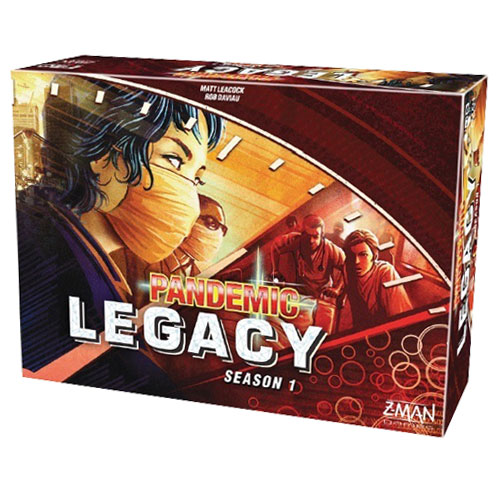 As you may have guessed, Pandemic Legacy is based on Pandemic, which is a superb cooperative game where the players work together to cure and eradicate diseases from the map. Each player has a special ability which adds a strategic wrinkle. Pandemic Legacy starts basically the same way… until all hell breaks loose. The game is divided into 12 months. If you win once or lose twice in a month, you proceed to the next month where the story progresses. As a result, you can play between 12 and 24 times total. We played about 20 times including a couple test runs at the beginning to refamiliarize ourselves with the strategy of the original game. The game tries to calibrate to your skill level by giving you perks if you lose, and removing them if you win. I thought we would be done in six months, but it took nearly a year and a half for our group of four to complete it because of various delays and scheduling difficulties.

I’ll start with some negatives. The rule changes and increased nuance, while exciting, can be difficult to keep in mind, particularly if multiple weeks elapse between play sessions. Some scenarios crop up that are not well explained by the rules. Fortunately, this guide at Board Game Geek helps explain some faqs that come up during game play. (NOTE: The site hides the unplayed months so it’s safe to visit). Also, some of the defeats can be particularly depressing. Sometimes the losses happened from seemingly impossible bad luck which only made matter worse. Additionally, even though the game evolves, some players didn’t enjoy repeating essentially the same game every week.

Personally, I really enjoyed myself, and by the end, I think my teammates were happy we completed the game. It’s rewarding working together as a team, and I found the storyline and changing game mechanics to be very compelling. The victories were very satisfying, and it was fun to see the new challenges thrown at us, as well as what power ups we could use. If you can commit a group to a regular playing time, I would definitely recommend it.

You might have noticed that the box says Season 1 on it. Yes, Season 2 comes out this fall.